Our Kansas City Bicycle accident attorneys understand that, while all types of motor vehicle accidents can be severe, bicycle accidents tend to be catastrophic more often. This is largely attributed to their smaller size compared to the typical automobile involved in the crash. Comparing a cyclist to the average car (weighing 3,000 pounds or more) and it’s easy to see why these two-wheeled transports incur such massive damage when colliding with a full-sized car or truck. Additionally, the lack of any significant barrier between a rider and the road, another car, or building makes them even more susceptible to injury and death.

If you or a loved one were injured in a bicycle accident, you may be entitled to receive compensation for your injuries. Many motor vehicle drivers do not take notice of bicyclists on the roadways and as a result, cause devastating accidents. Bicyclists can only do so much to prevent accidents, and must constantly remain aware of approaching motor vehicles. If a car abruptly changes course, through changing lanes or a sudden unexpected turn, bicyclists often bear the brunt of the impact and the resulting damages.

If you or someone close to you has been the victim of a bicycle accident, contact an accomplished bike accident lawyer in Kansas City, MO. The Kansas City personal injury attorneys at Dickerson Oxton, LLC offer client-specific strategies to help make your case a success. We understand that living with these types of injuries is life-changing and often an uphill battle. Our goal is to recover financial compensation for our clients in order to assist them during this difficult time.

You can reach one of our Kansas City bicycle accident attorneys at (913) 428-8220 or you can contact us online by completing a free case evaluation form and we will get back to you promptly.

At our Kansas City, MO law firm, your initial consultation is always free of charge. We handle all cases on a contingent fee basis; if we don’t win, you don’t pay a thing.

As we’ve already established, bicycles are significantly smaller than cars and trucks. This can make them more difficult to spot by other motorists. Even though they are smaller, this does not excuse drivers from blame who collide with motorcycles and bicycles. A majority of these types of accidents occur in intersections where the cyclist is hidden from view behind another vehicle or building. Cars pulling out of driveways cause a large number of accidents with cyclists because the driver simply doesn’t see them coming. Oftentimes a driver will fail to yield the right of way when making a turn and strike a cyclist.

Despite its name and what it has come to mean, the term “accident” is, in fact, a misnomer. It implies that no party is at fault and that blame essentially isn’t allotted to any one person or entity. In terms of motorcycle and bicycle accidents, the Kansas City bike attorneys at Dickerson Oxton, LLC know this is far from the truth. As with most cases, the law of negligence typically assigns blame to a guilty party. Negligence can be described as conduct that a person engages in which is culpable in that it falls short of what a responsible person would or would not do in a given situation. Examples of negligent behaviors which contribute to bicycle accidents in Kansas City are:

It should be noted that this is just a sampling of the common scenarios that can cause bicycle accidents. If you suspect that a negligent driver caused your accident, it is generally in your best interest to contact an experienced Kansas City bike accident attorney right away.

After a devastating bicycle accident, often the first concern of any bicyclist is getting medical care and treatment. A police report should also be filed at the time of an accident that accurately chronicles what led to the crash. The responsible party’s insurance company will often try to get in touch with the victim after the accident in an attempt to coerce the victim to sign a settlement. It is important to hold off on signing an agreement until you have spoken with an experienced Kansas City bike accident attorney.  Insurance companies are in the business of making money, and their settlement offer may not consider the extent of your injuries.

A claim for damages after a bicycle accident brought in civil court could include the following:

Kansas and Missouri are comparative negligence states, which means that the total damages will be reduced by the percentage the victim is found to be at fault for their own injuries. There is a slight difference between the two; Missouri is a pure comparative negligence state, so if a victim is awarded $10,000 in damages but is found to be 25 percent at fault, they would only receive $7,500 in total compensation.

An experienced personal injury attorney will carefully examine the facts of your case and the extent of your injuries in order to file a claim against the responsible party. An attorney will also be able to detail the percentage that a court could find you to be at fault for your injuries.

Bicycle Laws in Kansas and Missouri

Kansas and Missouri have implemented many laws pertaining to the rules cyclists must follow on the road and how other motorists should treat them. In general, bicyclists must obey the same laws as any driver, but there are several specific regulations by which a cyclist has to abide:

Motor vehicle drivers must also remain attuned to the rules of the road and are subject to their own laws regarding the distance their vehicle may be from the bicyclist and the manner in which they approach a bicyclist on the road, which is a minimum of three feet. Furthermore, drivers may not travel or park their cars in designated bicycle lanes. The failure of a driver to follow these rules could lead to misdemeanor offenses or traffic citations.

What was once an afterthought given the rise of the automobile, commuting by bicycle is back in style. Bicycles are an environmentally friendly alternative to the automobile and greatly reduce carbon emissions. Beyond that, bicycles provide a healthy alternative to driving or taking the bus. Most people throughout Kansas City and the surrounding area still drive vehicles or take the bus into work each day though, and some are not mindful of cyclists on the road.

Bicycle accident fatality trends bear this out, with the majority of fatalities moving from younger age groups to older adults. 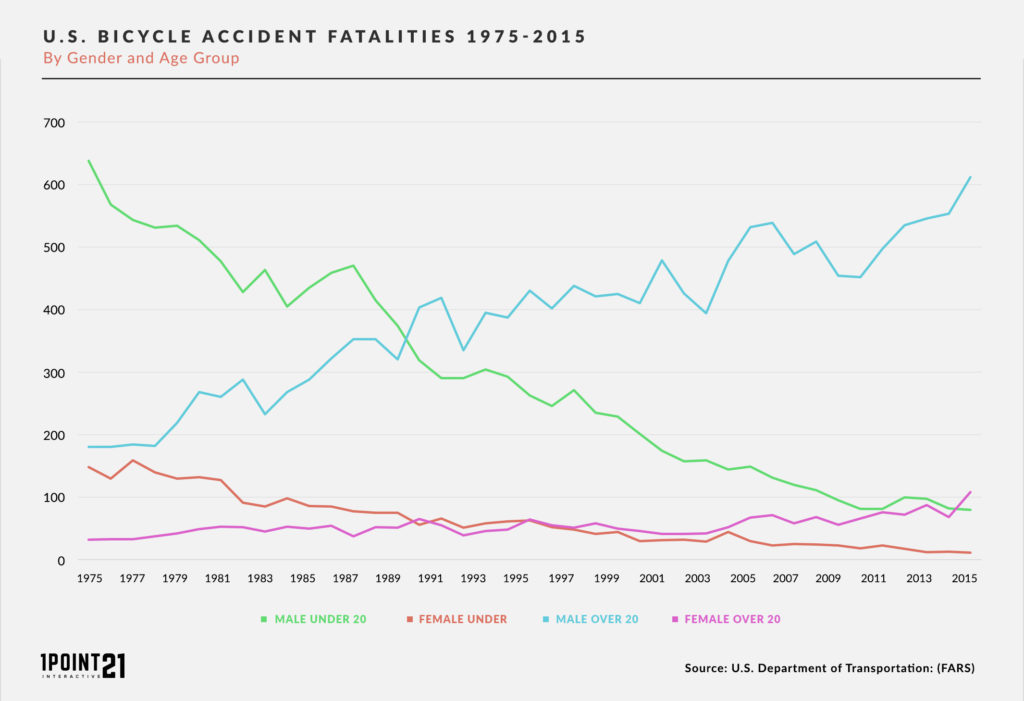 While this transition in age group is clear, so too is the fact that males (whether young or old) are killed much more in bicycle accidents than are women.

While some of this age group change has to do with more older adults riding bikes, it is also quite clear that safety measures and awareness campaigns have likely contributed to the significant decrease in youth biking fatalities.  Kansas and Missouri have produced many public service announcements that attempt to improve driver awareness to protect bicyclists on the road, especially children. Unfortunately, many drivers still fail to heed the warnings of the city and state officials, and continue to switch lanes or make a turn without looking for oncoming bicyclists. Some even act aggressively toward a cyclist on the road.

The National Highway Traffic Safety Administration (NHTSA) publishes annual data on crash statistics throughout the country.  Between 2010 and 2012, the NHTSA noted that Florida had the most bicycle fatalities per million residents. Kansas and Missouri place 39th and 45th, respectively. While this may seem like a statistic that is easy to ignore due to the low numbers, this does not consider the devastating injuries that plague bicyclists after an accident, and the lasting repercussions of these accidents.

wpDataChart with provided ID not found!

According to the Centers for Disease Control and Prevention (CDC), over 900 bicyclists were killed throughout the country in 2013, and nearly 500,000 bicyclists were hospitalized due to extensive injuries. The studies conducted by the CDC indicate that adolescents and young adults, as well as adults over age 40, have the highest bicycle death rates. Children, adolescents, and young adults under the age of 24 are the most likely to receive injuries from bicycle accidents, accounting for one-third of all bicycle related injuries requiring a hospital visit.

The number of bicycle fatalities in Missouri has remained relatively stable throughout the last five years, according to the Missouri Department of Transportation, although the largest number of fatalities occurs to victims over the age of forty-five.

Bicyclists involved in an accident are often subject to extreme injuries, ranging from broken bones to amputations. Bicyclists are not protected from the dangers of an accident compared to most drivers and passengers of a car. They have nothing to brace themselves with during an impending impact of a motor vehicle or semi-trailer. These accidents can have life-altering effects on bicyclists that require ongoing medical care. Some of the most common injuries are:

On most occasions, cyclists will incur several types of injuries which can give rise to substantial medical bills. Hiring a Kansas City personal injury lawyer and pursuing a claim against the responsible party may be the only way to alleviate these costs.  Nothing that cyclists can do plays a larger role in preventing bicyclist fatalities than the helmet. Bicycles do not offer protection against the force of a multi-ton vehicle colliding with a bicyclist on the road. A helmet can protect a cyclist from the most extreme injuries that can occur to the brain. Contact a brain injury attorney in Kansas City to help you build your claim if you received a brain from a bike accident.