The Kansas City wrongful death attorney at Dickerson Oxton, LLC understands that the loss of a loved one can be the hardest and most painful thing a family may experience. Often, even long after the life is lost, there still exists extensive emotional pain and suffering. When a person dies as a result of the negligent actions of another, then this pain can be all the more severe.

Accidents resulting in the untimely deaths of a loved one, presents surviving family members with an incredible loss. Love, companionship, and guidance can never be replaced after a loved one is tragically taken. Courts today can only offer financial settlements to those surviving from the negligent party. While this compensation certainly won’t completely ease the pain you are experiencing, it can alleviate some of the costs and losses that you have suffered. If you have lost a loved one due to the negligent actions of another, contact an experienced Kansas City wrongful death lawyers at Dickerson Oxton, LLC as soon as possible. Our compassionate attorneys are standing by to help you during this difficult time.

You can reach one of our experienced wrongful death lawyers at (913) 428-8220. Alternatively, you can fill out our free case evaluation form on our website and we will get back to you promptly.

What Can You Get Compensation for After a Wrongful Death?

When the negligent actions of another cause a person’s life to be cut short in Kansas City, then the victim is said to have had a wrongful death. While each of the surviving family members of the decedent can each file an individual claim for this wrongdoing, typically the family as a whole is represented by a single lawyer. In the event that there are no family members left, the estate of the decedent can bring forth a case to receive compensation. Those pursuing a claim in Kansas City seek compensation for:

There is no limit to the number of pecuniary damages – such as medical expenses, funeral costs and lost wages – which can be recovered. One of these pecuniary damages is the potential loss of tuition for a child who hasn’t yet finished high school. Damages sought in this regard will be carefully considered in a wrongful death claim, taking into account the child’s loss of education with the parent no longer there.

In Kansas, the cap on non-pecuniary damages – such as loss of consortium, suffering or loss of guidance – is $250,000. In Missouri, it’s $350,000, which was recently upheld by the state Supreme Court in a case which saw non-pecuniary damages reduced to that amount from the $9 million the jury originally awarded.

In Missouri, damages can be sought for the value of care that the deceased person provided. For example, if the person was a stay-at-home mother who did not work full-time and spent at least 50 percent of her day taking care of the children, Missouri law stipulates that care is worth 110 percent of the state’s average weekly wage. Kansas accounts for these losses as well, but a specific dollar amount is not defined.

Who Is Allowed To File a Wrongful Death Claim?

In Kansas and Missouri, the surviving spouse, children or grandchildren are usually the one’s who file the lawsuit. If there is no spouse or children, then a sibling can file for wrongful death. A survival lawsuit may also be brought by a representative of the decedent’s estate, should there be no family member’s or dependent’s to do so. A suit cannot be filed by a friend or distant family member, anyone who cannot demonstrate a pecuniary loss by the person’s death. However, in Missouri, if no family member or representative comes forward, the court can appoint a “plaintiff ad litem.” This designation applies to a person “entitled to share in the proceeds” of a wrongful death claim.

What is the Statute of Limitations for Wrongful Death Cases?

The statute of limitations to bring a wrongful death case is two and three years from the date of the person’s death, in Kansas and Missouri respectively. There are some exceptions to this, one being that it does not apply to a minor. The limitations clock does not start ticking until the child turns eighteen. However, if the surviving spouse were to file on behalf of the family, then the child would receive benefits until they turned eighteen.

What Is a Wrongful Death Lawsuit?

A claim is filed by surviving loved ones when someone is killed as a result of the negligence of another person. A wrongful death lawsuit is not a criminal proceeding; you cannot request jail time as part of the lawsuit. Rather, it seeks to hold the responsible party or parties accountable by awarding monetary damages.  These damages can range from covering medical and funeral expenses to compensatory and punitive damages.

All 50 states in the U.S. have wrongful death laws, but that wasn’t always the case. Before wrongful death law was adopted, these cases were ruled by Common law and negligence died with the victim; leaving survivors no recourse to recover compensation for the loss of their loved one.

While laws vary from state to state, survivors must typically show several things when filing a claim.

As with personal injury, there are many different sources of Kansas City wrongful death. Negligence needs to be established in these claims. By definition, negligence is a behavior or act that is culpable in that it falls short of what a reasonable person would or would not do in a given situation. These types of cases fall into tort law, or civil wrongs done to one by a negligent person. Some common root causes for these types of deaths in Kansas City, MO include:

Pinning the exact amount of deaths that a result of another person’s negligence is difficult. Often these are cases that take careful research and a whole lot of work to prove the link. According to the Centers for Disease Control (CDC), approximately 136,000 people die from injuries sustained in an accident every year and. while not every one of them qualifies as a wrongful death, many happen as a result of another party’s reckless actions.

wpDataChart with provided ID not found!

One of the most common reasons for wrongful death lawsuits are automobile crashes. There are close to 34,000 traffic deaths every year, and there is perhaps no other activity that puts people at the mercy of the behavior of others than driving a car. However, advances in automobile safety and safe driving campaigns have contributed to lower the fatality rate for motor vehicle-related accidents by more than half since 1950; from 24.4 per 100k to 11.1 in 2014. At the same time, while down from 1950, the overall rate of deaths due to unintentional injury has been rising nearly every year since 1990.  Deaths do to poisoning are a big driver of this change, up from 2.4 per 100k in 1950 to 14.8 in 2014. 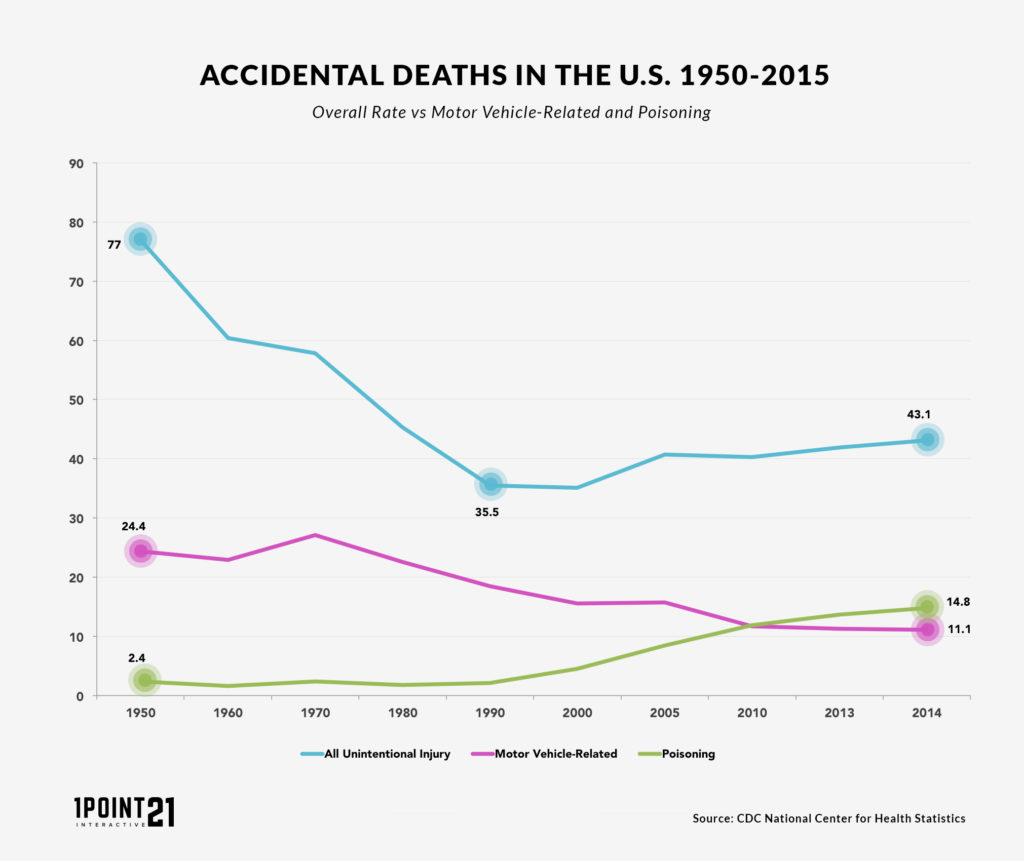 Estimates vary depending on the study, but as many as 98,000 people die every year due to medical malpractice. A misdiagnosis or failure to diagnose, surgical errors, and improper care all fall under the umbrella of medical malpractice. The most common defendants in such cases were obstetrician-gynecologist (OBGYN, 19 percent) general surgeons (17 percent) and primary care physicians (16 percent). It is possible to sue the hospital as a whole, rather than just the doctor, in a medical malpractice claim.

Slip and falls and workplace accidents are the next most common causes of wrongful death. In both cases, claims of wrongful deaths are usually filed due to the failure by the property owner or company to foresee potential dangers. For example, if an elevated walkway was unguarded, stairs were faulty or there were a lack of safety signs, these contributed to the accident. While there was no direct action by the other person causing the death, their failure to preserve safety makes the property owner liable.

Otherwise known as sovereign immunity, a wrongful death claim can only be brought against federal and state government agencies in certain circumstances. Every state’s law is a little different in terms of exceptions and damage caps, and in Missouri:

In Kansas, the laws are:

There are a host of exceptions for which a government agency cannot be held liable. The destruction or unauthorized removal of a road sign by a non-government person, snow or ice conditions, and road maintenance are just a few examples. Sovereign immunity protects state agencies from wrongful death claims for things which they may have had little or no ability to prevent.

In general, these claims compensate the individuals of the decedent; a survivor claim compensates the decedent’s estate. Damages for pain and suffering can be sought if the decedent did not die immediately after the accident. If they survived for a period of time and incurred medical expenses, ambulance costs and/or loss of earnings, compensation for those damages would be sought in a survivorship claim.

Damages incurred following a person’s death, such as funeral expenses, would be brought forth in a claim. A survivor claim can only be filed if the person lived for a period of time before passing as a direct result of the incident. These separate claims give the surviving family a chance to be compensated for all expenses, lost wages and missed productivity that occurred before their death but after the accident.

Surviving family members of those who fall victim to a wrongful or untimely death lose more than just a person; they’re losing a leader, a person to confide in, and a person to look to for guidance. These aspects can never be replaced as the surviving family members are left with a life devoid of future relations with the deceased. Seeking a claim of wrongful death against those responsible may be the only way to alleviate any of the sufferings. Contact our lawyers at (816) 268-1960 in Kansas City for a free consultation to discuss your case today.