Motorcycles offer the rider an unparalleled sense of freedom that cannot be replicated in a typical motor vehicle.  The feeling of being on the highways of Missouri or Kansas with little in the way of a nonstop ride, makes any motorcyclist crazy with anticipation.  The highways of Missouri and Kansas offer motorcyclists a unique opportunity many do not get to experience throughout the country: traffic-free highways.

Unfortunately, the freedom that comes with driving a motorcycle offers little protection during an accident with a motor vehicle, thereby often leading to extreme injuries.  The news is often full of reports of terrible motorcycle accidents in Kansas City and the lingering damaged caused by these accidents, which can quickly become fatal.  Motorcyclists have little to protect them from the elements and only a helmet to protect their head from a collision.  The rest of their body is unprotected, and therefore when a large semi-trailer comes barreling into an innocent motorcyclist, the results can be catastrophic.

The most recent data provided by the National Highway Traffic Safety Administration (“NHTSA”) indicates that the overall trend of motorcyclist fatalities is on the slow decline.  The number of motorcycle fatalities decreased approximately 2 percent from 2013 and 2014, and decreased 6 percent between 2012 and 2013.  However, there were still approximately 4,500 motorcycle fatalities in 2014, indicating an ongoing need to determine a solution to this issue throughout the country.

WHEN DO MOTORCYCLE INJURIES AND FATALITIES MOST OFTEN OCCUR? 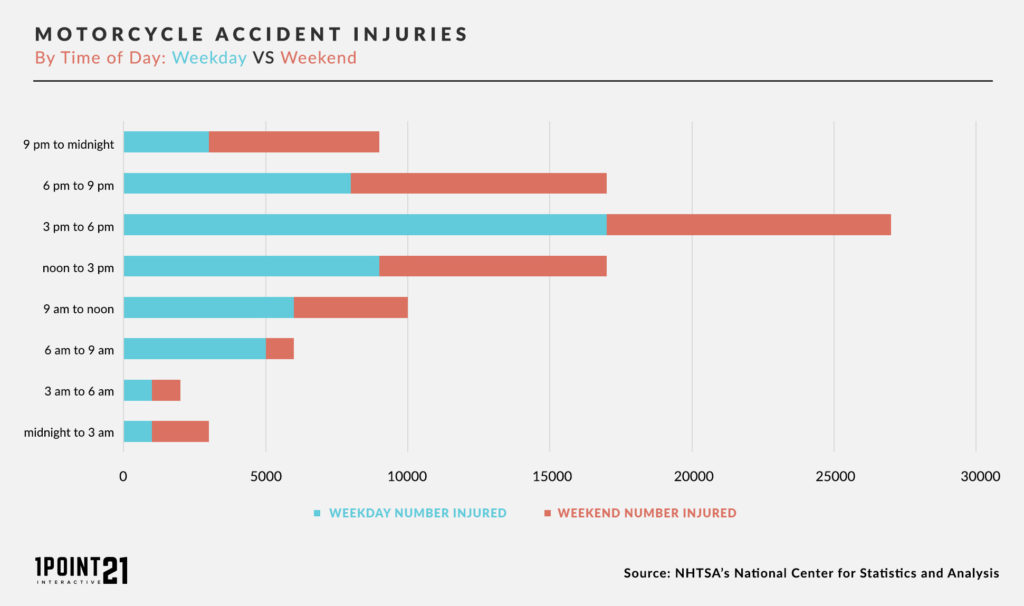 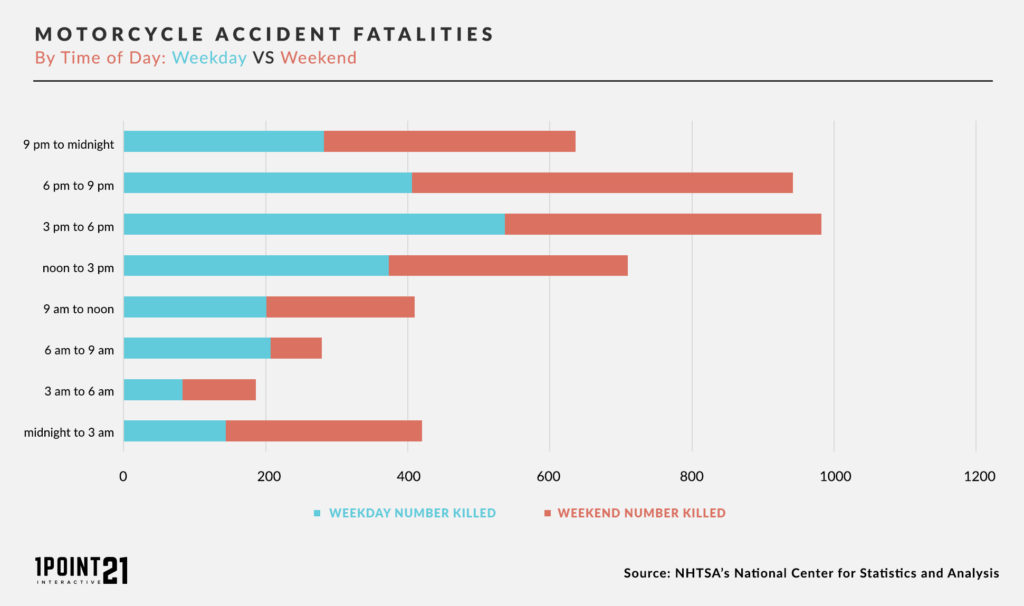 The Missouri State Highway Patrol keeps careful records of the total number of accidents which motorists are involved in during any given year within the state of Missouri.  The total number of accidents involving motorcycles in Missouri over a ten-year period reached a peak in 2012, with a total of 2,059 crashes resulting in nearly 2,400 people injured, and nearly 100 fatalities.  However, during this same period, the number of fatal crashes was the highest in 2008, with 103 accidents.  In 2014, the state of Missouri reported 363,000 licensed motorcycle drivers.

Similar to Missouri, Kansas experienced a marked increase in the number of accidents involving motorcyclists in 2012, with 1,324 total accidents. Out of this number, there were a reported 1,010 injuries, and 46 fatalities.  However, over a ten-year period, the highest year in terms of fatalities was in 2006. In 2014, Kansas reported a total of 219,000 registered motorcycle drivers.  The trend in Kansas has been on the increase since 2004, indicating a higher number of motorcyclists involved in serious accidents.  Whether this is due to a higher number of motorcyclists on the roads, or a general lack of caring by the public in terms of being aware of motorcyclists, it is important to study this number to determine what can be done to reduce the number of tragic accidents.